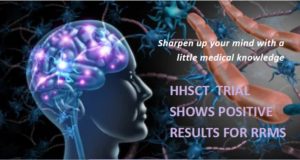 WHAT?
A clinical trial investigating the impact of haematopoietic stem cell transplantation (HSCT) as a treatment option for people living with relapsing-remitting MS (RRMS) and comparing it to current disease modifying therapies (DMTs) for multiple sclerosis.
WHO?
The research was led by Northwestern University, but involved four clinical centres across the US, Europe and South America.
HOW?
The study involved 110 people with RRMS, who were randomly chosen to either be included in the group that received HSCT or a currently available MS treatment.
WHERE/WHEN?
The study was published in JAMA (the third highest ranked medical journal in the world) in January, 2019.

FINDINGS:
#1: The group that received the HSCT treatment had delayed disease progression compared to the group taking disease-modifying therapies (see Thought #2 for why we need to be careful about this comparison).
#2: Only 8 out of 53 people that had HSCT experienced a relapse within the first 5 years after the treatment was undertaken.
#3: There was a suggestion that HSCT treatment actually reduced the EDSS within the first 6-12 months after the therapy and resulted in a reported improvement in quality of life.

THOUGHTS:
#1: This study provides further evidence to suggest that HSCT can be an effective therapy for people living with RRMS, especially those with highly active, inflammatory disease. It will be important to confirm these results with larger trials in the future, though the number of studies showing this is now quite extensive.
#2: It is difficult to really assess how HSCT compares to other MS therapies from this trial.  This is due to the fact that the treatment group contained people on many different therapies, which we know will have different levels of effectiveness. Similarly, the participants weren’t blinded to which group they were in (something that is very difficult for a trial of HSCT) and so the possibility of placebo effect, especially for some of the participant reported outcomes, can’t be ruled out.

IMPORTANCE
Hematopoietic stem cell transplantation (HSCT) represents a potentially useful approach to slow or prevent progressive disability in relapsing-remitting multiple sclerosis (MS).
OBJECTIVE
To compare the effect of nonmyeloablative HSCT vs disease-modifying therapy (DMT) on disease progression.
DESIGN, SETTING, AND PARTICIPANTS
Between September 20, 2005, and July 7, 2016, a total of 110 patients with relapsing-remitting MS, at least 2 relapses while receiving DMT in the prior year, and an Expanded Disability Status Scale (EDSS; score range, 0-10 [10 = worst neurologic disability]) score of 2.0 to 6.0 were randomized at 4 US, European, and South American centers.  Final follow-up occurred in January 2018 and database lock in February 2018.
INTERVENTIONS
Patients were randomized to receive HSCT along with cyclophosphamide (200 mg/kg) and antithymocyte globulin (6 mg/kg) (n = 55) or DMT of higher efficacy or a different class than DMT taken during the previous year (n = 55).
MAIN OUTCOMES AND MEASURES
The primary end point was disease progression, defined as an EDSS score increase after at least 1 year of 1.0 point or more (minimal clinically important difference, 0.5) on 2 evaluations 6 months apart, with differences in time to progression estimated as hazard ratios.

RESULTS
Among 110 randomized patients (73 [66%] women; mean age, 36 [SD, 8.6] years), 103 remained in the trial, with 98 evaluated at 1 year and 23 evaluated yearly for 5 years (median follow-up, 2 years; mean, 2.8 years).  Disease progression occurred in 3 patients in the HSCT group and 34 patients in the DMT group.  Median time to progression could not be calculated in the HSCT group because of too few events; it was 24 months (interquartile range, 18-48 months) in the DMT group (hazard ratio, 0.07; 95% CI, 0.02-0.24; P < .001).  During the first year, mean EDSS scores decreased (improved) from 3.38 to 2.36 in the HSCT group and increased (worsened) from 3.31 to 3.98 in the DMT group (between-group mean difference, -1.7; 95% CI, -2.03 to -1.29; P < .001).  There were no deaths and no patients who received HSCT developed nonhematopoietic grade 4 toxicities (such as myocardial infarction, sepsis, or other disabling or potential life-threatening events).
CONCLUSIONS AND RELEVANCE
In this preliminary study of patients with relapsing-remitting MS, nonmyeloablative HSCT, compared with DMT, resulted in prolonged time to disease progression. Further research is needed to replicate these findings and to assess long-term outcomes and safety.

Our society was incorporated in may 1989, is registered with the Charities Commission, and is also GST registered.

Disclaimer
The views and opinions expressed in this newsletter/website may not necessarily be the views and opinions of Multiple Sclerosis Wanganui Society (Inc) or its members. Information presented has been prepared using sources believed by the author to be reliable and accurate. However the author makes no guarantee or assumes no legal liability or responsibility for the accuracy, omissions or completeness of any information presented including any links to other websites. The author accepts no responsibility for decisions made by readers
.

A SPECIAL THANKS TO THE FOLLOWING ORGANISATIONS FOR THEIR CONTINUED SUPPORT!