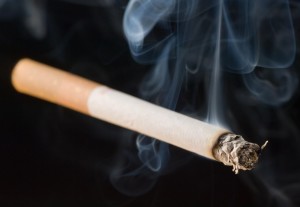 A neurotoxin called acrolein found in tobacco smoke that is thought to increase pain in people with spinal cord injury has now been shown to accumulate in mice exposed to the equivalent of 12 cigarettes daily over a short time period.

One implication is that if acrolein is exacerbating pain its concentration in the body could be reduced using the drug hydralazine, which has been approved by the U.S. Food and Drug Administration for hypertension, said Riyi Shi (pronounced Ree Shee), a professor in Purdue University’s Department of Basic Medical Sciences, College of Veterinary Medicine, and Weldon School of Biomedical Engineering.

The drug has been shown to be effective in reducing acrolein levels in research animals, and Shi is working to develop a lowShi low–dose version for that purpose in humans.

Mice were exposed to a level of acroleinn equivalent to 12 cigarettes per day over three weeks. Previous research has focused on acrolein accumulation in the respiratory system but not in the bloodstream and spinal cord. It is known that acrolein is accumulated in urine in human smokers after years of smoking.
“This is the first animal study demonstrating that an acute short term of weeks of smoking could also cause acrolein to accumulate in urine and more importantly in spinal cord tissue, a part of central nervous system known to be vulnerable to acrolein,” he said.”

The researchers documented the concentration of biochemical markers for acroleinn in the urine and spinal cord. Findings, appearing in the journal Neuroscience Bulletin, indicate the accumulation of the toxin was about 50 percent higher than normal, a level known to have pathological implications.

“The data indicated that acrolein is absorbed into the circulatory system and some enters the nervous system,” Shi said. “It is expected that these findings may facilitate further studies to probe the pathological role of acrolein in the nervous system resulting from smoke and other external sources through long and short term, both active and passive exposure.”

The research paper was authored by Melissa Tully, a graduate student at Purdue and the Indiana University School of Medicine; Purdue graduate students Lingxing Zheng, Glen Acosta, and Ran Tian; and Shi.

Acrolein is produced within the body after nerve cells are damaged. In spinal cord injury and in multiple sclerosis, the myelin insulation surrounding nerve cells is destroyed and the nerve fibres themselves are damaged by acrolein. The toxin acrolein also is found in air pollutants including tobacco smoke and auto exhaust.

“It is already known that smoking can increase pain for people with spinal cord injury and worsen the condition of multiple sclerosis, but we don’t know exactly why,” Shi said. “I am saying that acrolein might be the key culprit here and that inhaled acrolein could intensify multiple sclerosis and increase pain sensation.”
The research is ongoing and was funded by the Indiana State Department of Health, the National Institutes of Health, and an Indiana CTSI CBR/CTR Pilot Program Grant.
Source: Purdue UniversitySource: University
© 2014 Purdue University (05/12/14)

Our society was incorporated in may 1989, is registered with the Charities Commission, and is also GST registered.

Disclaimer
The views and opinions expressed in this newsletter/website may not necessarily be the views and opinions of Multiple Sclerosis Wanganui Society (Inc) or its members. Information presented has been prepared using sources believed by the author to be reliable and accurate. However the author makes no guarantee or assumes no legal liability or responsibility for the accuracy, omissions or completeness of any information presented including any links to other websites. The author accepts no responsibility for decisions made by readers
.

A SPECIAL THANKS TO THE FOLLOWING ORGANISATIONS FOR THEIR CONTINUED SUPPORT!